I've always had fun celebrating St. Patrick's Day. Making green eggs, or green milk, or whatever food that isn't green that can be made green. Another excuse to make what would otherwise be an ordinary day, extraordinary.

Two years ago, St. Patrick's Day took on a new, special meaning for me and my family.

We said "hello" and "goodbye" to our fifth child, a son, Michael Daniel.

He has a story all his own, that I hope to eventually add to this blog.

But for now, I wanted to share what a birthday looks like (at least for our family) after losing a child: 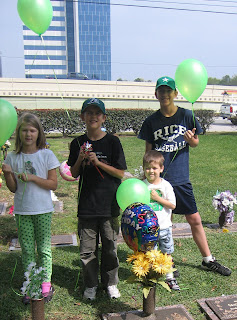 Each of the kids released a green balloon and we watched them float "up to heaven". The fog from this morning was clearing and we saw them go into the clouds and then a minute later, they came out the top. It was amazing! 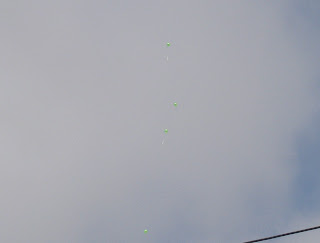 I wanted to sort of summarize my disease and treatment for those who might be interested (these are the kinds of things I wanted to know about others' experiences when I was starting treatment):

My PET scan was done on Tuesday. I was very proud of myself for navigating through the bowels of the Houston Medical Center and making it to my appointed destination. Up to that point, I had managed to steer clear of the medical center entirely during my treatment/radiation.

The last time I had reason to go down there was the two week span when Don was in and out of Hermann Hospital after being life-flighted there following his major car accident.

It was an adventure, bringing back lots of good memories from nursing school. Carpooling with my classmates. Just being in the buildings, thinking, "I'm going to be a nurse, someday . . ." I really love hospitals. God just made me that way.

The bonus? I got to meet my sorority sister, Lori, for lunch down there. It was really great to catch up with an old friend.

Wednesday, Don and I went back to the Proton Center to see my doctor and get the PET report. We weren't expecting any significantly good news, because I was under the impression there would still be some "activity" from the radiation and therefore no way to know for sure that the cancer was gone. Plus, in the last few days I had been feeling some things that caused me to actually prepare myself for bad news.

The report showed that there was ABSOLUTELY NO CANCER left in my chest.

I don't think it has really sunk in yet. It was supposed to be April before we could know that for sure (I thought). But I have officially earned the title "Cancer-free".