An Advocate for Life

Since the time I began this blog and posted the picture of our sweet Michael's (M5) hand on my mother's finger we have had several requests to use that picture in emails and on facebook. They use it to show others the perfection of a child, who many would have simply called a "blob of tissue". They use it as an argument to sway others to see the value of the life of one so small.

God has encouraged me to see our precious son's life continues to have a purpose, long after he has left us on this earth.

It is in his honor and in honor of all lost babies who are grieved, whether by choice or circumstance, that I share the following email with you. And if you agree, I would ask that you find a red envelope and participate this weekend:

This afternoon I was praying about a number of things, and my mind began to wander. I was deeply distressed at the symbolic actions that President Obama took as he began his presidency. Namely, that he signed executive orders releasing funds to pay for abortions, permission to fund human stem cell research, and federal funding for contraception. I have been involved in the pro-life movement for nearly 20 years, and it pained my heart to see a man and a political party committed to the shedding of innocent blood. This man, and this party lead our country, but they do not represent me or the 54% of Americans who believe that abortion is wrong and should no longer be legal.

As I was praying, I believe that God gave me an interesting idea. Out in the garage I have a box of red envelopes.

Like the powerful image of the red LIFE tape, an empty red envelope will send a message to Barack Obama that there is moral outrage in this country over this issue.

It will be quiet, but clear.

Here is what I would like you to do:

Get a red envelope. You can buy them at Kinkos, or at party supply stores. On the front, address it to

On the back, or on a note inside, write the following message:

This envelope represents one child who died in abortion.

It is empty because that life was unable to offer anything to the world.

Put it in the mail, and send it. Then forward this email to every one of your friends who you think would send one too.

I wish we could send 50 million red envelopes, one for every child who died before having a a chance to live.

Maybe it will change the heart of the president.

We should all try to mail them on the same day so they arrive within a day or two of each other and be even more of a visual at the White House.

With Valentines Day coming up, red envelopes should be easy to come by too.

Say we all mail them on the weekend of Feb 28-March 1st.

That gives us almost month to pass the word as far and wide as we can.

Of course, you can send a red envelope anytime you want, but getting lots at once is great too.

So pass the word!

LIFE means so much!

We started the day with a fun breakfast. We don't often get to eat breakfast as a family. And Valentine's breakfast has been a tradition for a few years: 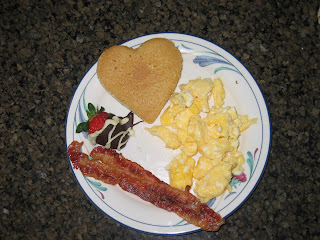 Then my parents and my Aunt Judy kept the M's so Don and I could go out to lunch at The Cheesecake Factory. (YUM!!): 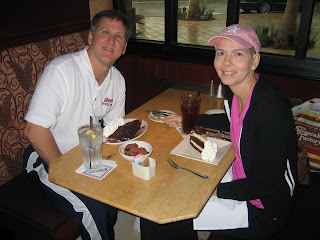 Valentine's Day is definitely one of my FAVORITE holidays. I love red, hearts and telling people I love just how much I love them!

Eighteen years ago this past week (February 11, 1991) Don proposed to me with a sweet Sheltie puppy we named "Sandy".

Two years ago on Valentine's Day we announced we were expecting our fifth child: 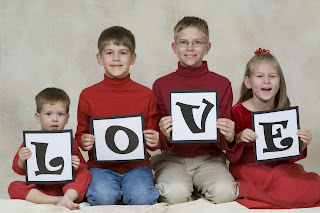 Last year I was still grieving the loss of our sweet Michael.

But this year, oh, this year, I am grateful for LIFE and HEALING and LOVE!

I cannot begin to imagine the grief they are feeling right now.

If I could, I would like to ask you to pray for someone I have found through "blog-hopping". If you visit any of the blogs on my sidebar, you may have, by chance, found her, too.

Her name is Kristi Walker. She is a young mother in North Carolina. Within days of giving birth to her third child, she was diagnosed with stage IV breast cancer with metastases to the liver, spine and pelvis.

I subscribe to their updates, and today she is in grave condition.

If you go to this link you can read about her and her family. You will have to create an account at carepages, but they will only send you updates on Kristi if you want them (and not advertisement, etc.).

Today, they ask specifically that we pray for the antibiotics to fight a particularly menacing infection, that she be relieved of pain, and that her platelet count would come up so that she could receive her next round of chemotherapy, which is due to be given tomorrow.

Your prayers have been such a blessing to me. I know they would be to this family, as well.

I sat in the quiet of my car for the first time this week. This wonderfully, busy, noisy, hectic week.

It had become commonplace for the last month. My daily commutes to the proton center afforded me at least an hour and a half of car time.

Being in the car by myself is very relaxing to me. Most of the time, I listen to music. And lately, I have rediscovered listening to the local Christian radio station.

Normally, we listen to Christian CDs in the car. By listen, though, I mean it is simply background noise to the louder noise being made by any number of children in my car. We know what the music is saying, because at one time or another we have actually heard it in its entirety.

But, tonight, I could hear the music playing on the radio as M3 was on the softball field and M4 was asleep in my lap in the driver's seat (I was parked in the parking lot).

A "new" song by Mercy Me called "Finally Home" came on the radio.

You know how music has a way of triggering memories? It brought back a great memory for me - the first time I heard the song.

It was last summer at the YMCA of the Rockies. We managed to squeeze a few day's stay there on our way home from Steamboat Springs. When we arrived, we discovered that it was Gospel Music Association week on campus. There were Christian musicians, worship leaders, etc. everywhere! And they had a concert every night!

Although I would have liked to have gone to them all, I restrained myself and picked one - Mercy Me. There was another group and singer who performed "warm-up" that night, too. The first group was pretty hard rock. I can remember the music reverberating in my chest. I had this "allergy" thing going at the time. I didn't really know how sick I was yet.

And Mercy Me sang "Finally Home".

Hearing it tonight made me think of the me I used to be. The me that was blissfully unaware of what cancer would do to me in the coming months.

All of the sudden, tonight, I realized that I am on the other side.

And I wondered, "How did I make it here?"

It was as if it was all a dream and I had just awakened.

But it did all really happen. Six months of my life has passed since that night. I have suffered serious illness. I have been ministered to, prayed for, touched, fed and cared for.

I made it here because my husband said, "We are going to beat this thing."

I made it here because people that know and love me and strangers have prayed.

I made it here because people have encouraged me in spoken and written word.

I made it here because God promised me I would.

Welcome to one of your more obscure American holidays!

I'm not sure how we as a family started celebrating it exactly. It must have had something to do with my former days as a mother of small children who was always looking for something fun to do to fill our endless days together.

One January, I stumbled upon the Groundhog Day cupcake idea. And it has stuck. My children have come to expect it. Even M1, who is now 13, did not want to miss out on the decorating fun while he was out at a Super Bowl party last night. (We saved some for him!)

I wish I could give credit to wherever we got the idea from, but here they are, in all their cuteness: 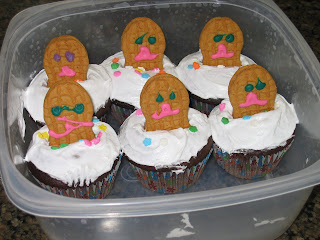 All you need is some cupcakes (I use chocolate - for the dirt :) ), some white icing (for the snow), sprinkles (we used flower sprinkles this year), Nutter Butter cookies (for the groundhog) and decorative icing (to make the eyes and nose of each groundhog) and you've got yourself some groundhog cupcakes!

It feels really normal to have made them. I can't even tell you how wonderful that is!

And, tonight, Don and I will most likely watch Bill Murray in Groundhog Day, our other Groundhog Day tradition.

By the way, the groundhog saw his shadow today - six more weeks of winter.

Where we live, most of the winter has felt like spring anyway, so that won't be all that bad!