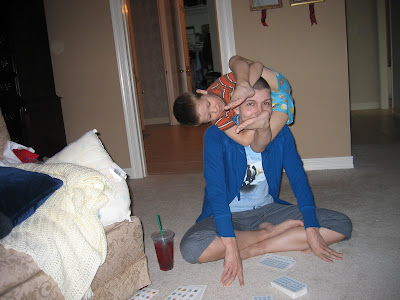 I was told after my March PET scan that all that remains of my former tumor is "scar tissue". I have a "scar" in my chest.

Since then, I have thought a lot about scars.

I have two scars on my face from two different childhood accidents. Occasionally, someone will ask me what the one on my lip is from. I relay the story as I have been told it happened (I was only two at the time), but I really have no recollection of the event itself. I am sure the emotional trauma of the event falls more on my mom and dad. They were the ones who most likely had to hold me down and listen to me cry as they stitched me up at the hospital.

My husband has scars on his leg. Close to 30 of them from the external fixator device he had in place for nearly six months after a car accident crushed both bones in his lower right leg. And he is permanently disabled (only slightly - and some days you wouldn't even know) as it is impossible to completely restore function after such an injury.


During one of my pregnancies (probably my first, because I am SURE I didn't have time to read after M1 came along . . .) I read in a mommy magazine how stretch marks are "badges of honor". And, I suppose, stretch marks are "scars", too.


I am really grateful to whoever wrote that, because I took it to heart. And it kept me from obsessing (as we in this airbrushed age can so easily do) about something that I had little control over. Especially when carrying a baby that delivered at 9 lbs. 5 oz!


Sometimes a scar is emotional. Abuse. Trauma. Loss. They are invisible, but no less tangible for the bearer. Those I have accumulated in my own life I have found even more difficult to deal with, because there is nothing there for the passerby to note. I don't have a scar on my forehead because I lost a child. I didn't have a bumper sticker that read: "Please drive carefully around me. My husband has been seriously injured in a car accident, and if I am driving a little slow, it is only because I am terrified I will be in an accident and there will be no one to care for my children."


That is one of the reasons why I added the quote to the end of my emails: "Be kinder than necessary, for everyone you meet is fighting some kind of battle." You just never know what people are going through.


I'm not saying people should have free reign to be rude or drive recklessly or just be disconnected in some way. Just that some times we don't SEE everything.


Add another scar to the list of those life has handed me.


The thing that struck me about scars is that you have to keep on LIVING to get one. If something kills you, it doesn't heal. A scar can only form, over time, after you have SURVIVED an event/accident/injury.


So I go back to what I had read about stretch marks. They are "badges of honor".


This, I believe, holds true for any scar, whether physical or emotional. They are "badges of honor" as well. Because it means you have survived. You have healed. Although you may never be the same or function the same. The scar serves as the reminder.


You can choose to dwell on the negative: the ugliness of it, the disability, the pain. Or you can choose to see it in the positive: I LIVED THROUGH IT! I have survived.


My husband doesn't enjoy having scars from his car accident. But he is glad he is alive to bear them. So am I. And they serve as a reminder of the things he learned over the months he recovered.


I definitely didn't ENJOY having cancer. But I am glad that I am alive to bear the scar.

(Thanks to my "Sassy Scrapper" friends for helping me finally get my thoughts together on this topic! Scrapbooking is therapeutic :) We missed you Robbie and Marie!)
Posted by Molly at 10:00 AM 4 comments:

Back in the Chemo Chair

It is an odd experience to go back to chemo. Especially when you are well.


I spent the last four Fridays sitting in a chemo chair. Once again, hooked up to drugs which, I was assured, would have no side effects.


The reason I was there was to receive Rituxan, which is not exactly chemo, but preventative therapy. If you really want to know the wikipedia definition, it is:

"a chimeric monoclonal antibody against the [cancer] protein CD20, which is primarily found on the surface of B cells".

If there are any remaining cancer cells (of the CD20 variety) left floating around in my body, this is the seek-and-destroy missile out to get them.


But in order to get the Rituxan, which is highly allergenic, I had to get IV steroids and IV Benadryl which reduces or eliminates any allergic reaction. Therin lies the problem.


If you've ever taken Benadryl, take how it made you feel and multiply it by about 10 and that's what you feel like as soon as the Benadryl hits your veins. I was used to it (as used to it as you can get) when I was doing chemo in the fall. I had my "routine" all set. The neck pillow, reclining my chair just right, my MP3 player. Well, I didn't quite get it right the first week. I was out of practice. But weeks two, three and four, I got pretty good naps.


But every week was different as far as how I felt the rest of the day. No rhyme or reason there at all. One week I would feel rested, the next week I felt like I had been hit by a truck. So I would just have to lay on the couch until the steroids kicked in . . .


Steroids make me hyper. That is actually good. I am very productive when I am on steroids. I actually didn't know I was getting steroids the first week. But I figured it out pretty quickly when I spent Saturday and Sunday doing multiple home improvement projects and the entire week eating everything in sight.


The next week, as they hung my drugs, my suspicions were confirmed. "Yes, you are getting a steroid."


The problem with being hyper for two days is what comes next. The crash.


Those muscle (labor all over my body) pains I had with full-blown chemo came back (7 on a scale of 1 to 10 as opposed to the 15 I felt before . . .). At first, I thought I had just "over done" it, and my muscles were sore from the work. But, week after week, it came and went in the same way it did the week before. I'm not sure what causes it exactly, but it makes for a very uncomfortable 24 hours at least.


This past week, as I was breathing and grunting my way through the pain (even after taking pain medicine), I told Don to remind me, in December, when I was rethinking my decision to repeat the treatment (I do it once a week for four weeks, every six months for two years - so June, December 2009, and June, December 2010) that it was still better than going through chemo.


The whole reason for doing this preventative, is just that, to PREVENT my lymphoma from coming back. If it comes back, we start over again, or worse. It is by no means a guarantee, but it does greatly reduce the chances.


Apart from the side effects, another unexpected occurrance was how badly I felt that I was cured, when the people sitting on either side of me were still in the fight for their lives.


Mr. P would ask me, and everyone else around, "Are you afraid of dying?" I saw him two of the four weeks of my treatment. I'm actually not afraid of dying. And I told him so. But the deaths of several celebrities in recent weeks has really been hard on him. And I remember how differently it effected me when I watched others around me lose their battle to cancer when I was still fighting my own battle. I wished I could tell him that he would be cured. I wished God would speak to him and tell him that he would indeed be well. I pray that he will find his peace with God if he never does find the cure for his cancer.


And then there was the week that I sat next to M. I was in my "usual" chair and when I woke up from my Benadryl nap, there she was sitting next to me! M was the precious lady who sat next to me my very first week of chemo, when I was gung-ho and terrified all at the same time. She looked amazing for having been through at least six months of chemo already. Her hair was growing back in a beautiful grey and I told her she should be a model. She answered my many questions about my hair coming out as well as lots of other things I had on my mind.


But it was apparent, that now, the additional nine months of chemo has taken its toll. She looked weary. But she remains in good spirits. And I pray for her, that if the chemo can't kill the cancer completely, that it will keep it at bay for a very long time. So that she can see her children graduate from college. And see her grandchildren.


I hope to see them both again in December.


It was a much different view from my seat this time around. And I am very grateful.

I used to wonder what happened to people whose blogs I followed diligently, and then they seemed to d i s a p p e a r.

There would be no post for weeks, and I would start to give up on them.


Now that life has returned to semi-normal, I feel like I am disappearing from the ranks of the blog-o-sphere as well. And I am learning what happens to those people, its called life.

I still think profound thoughts at times, but I am driving carpool or sitting by the pool or watching my daughter's swim meet, or occasionally swimming myself. I have made mental notes (scary!), and hopefully, I can share more of them with you in the days to come.

Summer is in full swing around here. And so is living. Gone are the days when I take THAT for granted.


I am sharing life with my family and I hope you are enjoying yours!