Here is our new baby, Missy. She is a toy Australian Shepherd, M3's Christmas present, the answer to our puppy prayers, and well worth the wait. (She is also my "fuzzy therapy" to help get me through chemo. When we are not house training, dealing with teething, socializing, etc. :) ) 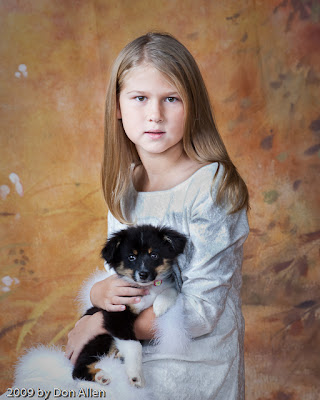 If you are looking for a dog like her, you can check out her breeder's website. I think all of her littermates are spoken for, but I am sure there will be more in the future!

Our church began celebrating "A Season of Prayer" for the next seven weeks. Don and I were both asked to contribute a daily devotional.

Give thanks in all circumstance, for this is God's will for you in Christ Jesus. 1 Thess. 5:18

And the first thing that came to my mind related to that verse was a day about seven years ago. I received a phone call from Hermann Hospital here in Houston. It is the primary trauma hospital for our entire region. They fly people there in helicopters. It was also close to my husband's office.

They told me Don had been in a car accident and that his ankle was broken . . . so far.

Now, I am an optimist, and so, I figured I was driving to the hospital, picking up my injured husband, and bringing him home. Got a call from Don's tennis partner, who said the weather was probably too bad for tennis that night. I jokingly told him tennis was definitely off and that hopefully Don was at Hermann because he had the accident close to the hospital and not because they had to fly him there in a helicopter.

Over the course of the hour long drive to the medical center, I went from thinking I would bring him home to what would I do if I had to identify his body? (When I was in nursing school doing my ER rotation, I overheard them calling a family member to come to the hospital when the patient had already died, but they only told them they were seriously ill.)

When I arrived at the ER, they couldn't find him on the patient register. I panicked, thinking he must be in the morgue. But then the volunteers at the desk realized he was "the John Doe that came in on Life Flight" (what a way to find out your husband was airlifted . . .) and that he was in X-ray.

They quickly took me to him. He was moved to an orthopedic room, awaiting surgery the next morning. Into the early hours of the morning, it was a blur of phone calls, anxious visits from friends and ministers, and coordinating our children's care at home.

And, when reading the above verse, this is what specifically came to mind about thanksgiving:

One drizzly October evening, seven years ago, I received a phone call from Hermann Hospital downtown. My first thought was that it must be someone from church calling. When the voice on the other end called me Mrs. Allen, I realized it was something very different. My husband had been in a car accident . . . he had a broken ankle . . . was I coming? I went from cooking dinner in my kitchen to the wife of a trauma patient in an instant.

That night, in Don’s hospital room, I lay on a cot next to his bed. My husband was bruised and bleeding, hooked to many tubes and beeping machines. He was scheduled for the first of what would end up being a total of seven surgeries in the morning. The road ahead would be long and difficult and painful. But right then, I was just thankful that he was alive and, at the moment, sleeping peacefully.

God wants us to give thanks in every circumstance, whether good or bad.

What can you thank God for today in whatever circumstance you find yourself?


I hope that you have a blessed Thanksgiving, in whatever circumstance you find yourself.

Recently, I was at one of M1's junior high basketball tournaments and enjoying watching the game. As I was watching the opposing team, I kept having the feeling that I knew some of the players. All the various places I could know those boys from ran through my mind: little league, homeschool groups, community organizations, etc. but I couldn't figure it out.

At half time, I was scanning the crowd for the rest of our cheering section and saw a familiar face. But it wasn't a face for our team, it was for the opposition.

In my former life (before children), I was a neonatal intensive care nurse. I took care of many babies, born at various stages of development. And every once in a while, I developed a special relationship with the parents/family of one of my patients.

And THIS familiar face was a mother of one of my former patients. One of the special people who I have been fortunate enough to keep up with for the past fourteen years.

And her son, one of the players on the opposing teams, was one of my last (and most favorite) patients I took care of in the NICU.

He was due a month before M1, but was born about four months premature (correct me if I am wrong, Chris). Eric (as I called him) was special to me partially because he was a living visual of what M1 was looking like in utero. But he was also special because of his parents and sister. They were just neat people. And over the course of his time in the unit, we spent a lot of time together.

One of the last days before Eric was discharged from the unit, he was my only patient. I spent a lot of time rocking him. He layed on my belly and kicked from the outside while M1 kicked from the inside. They must have been practicing their basketball moves even then . . .

Fast forward fourteen year, and here is Eric (at 6 ft.)and M1 (at 5'11")out on the basketball court battling it out. I was in awe and overwhelmed at BOTH of them.

You would never know that Eric had once been a micropreemie and the M1 had once fit in my belly! 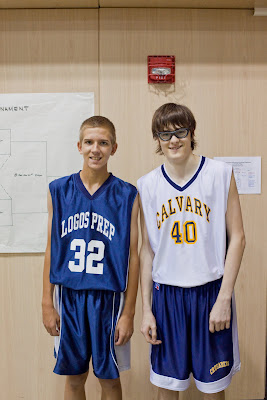 How can you say no to this face?

We have been talking for over a year about getting M3 a dog. She has done a lot of research and looked at several different breeds. But the timing (for many obvious reasons) had never been right.

So this weekend, we found out about a friend of a friend who was keeping a sweet Jack Russell/Chihuahua puppy looking for a home. When we saw "Sammy's" picture, we fell in love with him. 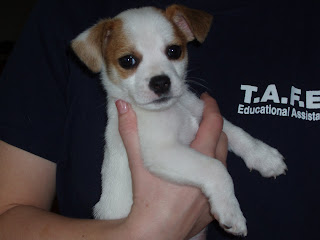 But in discussing him with Don, we decided he was not the right puppy for M3. It broke both of our hearts to have to tell her that we needed to keep looking and say "no" to Sammy.

I cried with her when I sent the email to my friend and her friend who had been looking for a home for Sammy. I am grateful that these two precious ladies were praying for us as we made our decision.

M3 seemed to be at peace when I assured her, that in respecting her Daddy's direction, in the end, the puppy she got would bring her so much more happiness (overshadowing the sadness she now felt).

And I am grateful for my husband who has to do the difficult thing sometimes and tell us "no". In the long run, I know it is the right decision.

I have to admit, I really DON'T want to do chemo again.

(UPDATE: This is preventative chemo - I have to do it once a week for four weeks every six months for two years after my original chemo. June/December 2009 & June/December 2010)

There is something to be said for being blissfully ignorant, and I am not (ignorant) anymore about what is coming.

I am feeling really good. It is going to be the Christmas holidays and school holidays. I have a lot I would like to do and enjoy.

And what do I get to do? Go get pumped full of medicine that is going to make me feel sick and tired.

I actually had a king-sized meltdown in front of my husband. Like a two-year-old, I told him I hadn't made my appointments yet "because I don't want to . . ."

Thankfully, for both of us, the last time I had a meltdown was over a year ago and related to the cancer, as well.

So, I'm steeling myself to make the call (still haven't) and considering booking a padded room as well.